The Best Time to Send Emails (Here’s What Studies Show)

The Truth About the Perfect Email Send Time

Wouldn’t it be nice if someone could just remove all the guesswork and tell you exactly when you should send out your email marketing campaigns?

There is a ton of data from various studies trying to do just that. The problem is, some of these studies are in agreement, while others are completely contradictory. Trying to make sense of it all can be extremely difficult and frustrating, especially when the parameters used by each study are totally different!

You may be wondering, Will all these studies even help me? Or will I have to A/B test it for myself?

The reality is, yes, you will have to experiment with your send times to hone in on the exact best times for your own list. Every email list is made up of a different set of people with different habits. Therefore, your best send time may or may not be the same as another email marketer’s best send time.

However, it is extremely valuable to have an informed place to start. Why start from ground zero when others have already done a ton of testing before you?

Armed with the right information, you can get a good head-start, and then you can test and tweak your send times to further perfect them.

Let’s take a look at what the studies collectively show is the best time to send emails. There are some valuable lessons to be learned from these studies.

What is the Best Day to Send Emails?

In a study conducted by MailChimp, an algorithm (“Send Time Optimization”) was used to gather information on the best time to send to individual email addresses in their local time zones. (The algorithm used data on subscriber’s engagement in order to determine the best times.)

Here’s what they discovered about the best day to send emails: 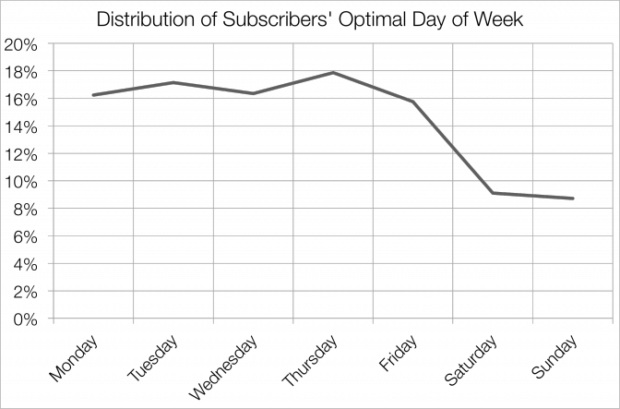 According to this graph, which includes all the compiled data from several billion email addresses, the best day of the week to send emails is on Thursday, but only by a small margin. There was actually very little difference between any of the weekdays, Monday through Friday.

Sending on the weekend was the least optimal day, with Sunday being the worst day to send emails.

However, open rates between all of the days were only 1.4% apart at most, so the day of the week really made very little difference in terms of open rates.

GetResponse also did a study, and their data showed that Tuesday had the highest open rate and click through rate, as well as being the most popular day to send emails.

Weekends were the least popular days to send emails, and they also had the lowest open rates. 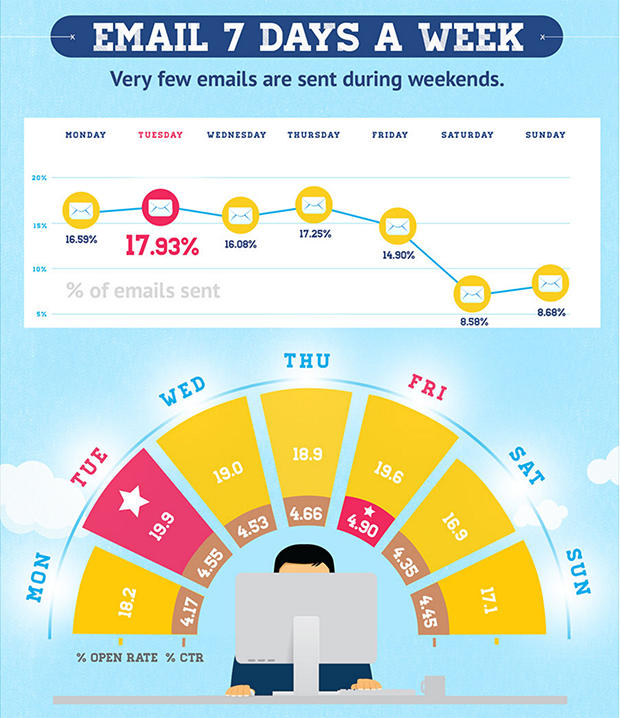 According to HubSpot’s report, Monday, Tuesday and Wednesday had the most email opens.

Tuesday was the best day, with 20% more opens than average.

Opens diminished as the week went on, with the weekends having the lowest open rates.

The worst days for open rates were weekends. 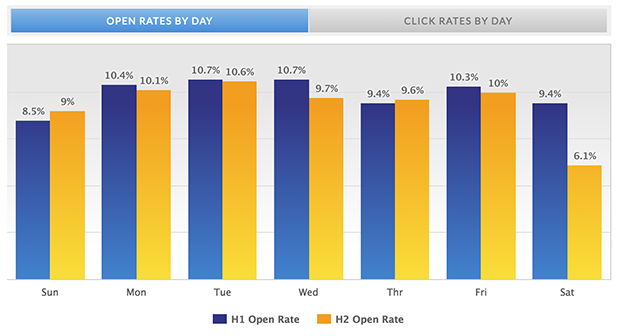 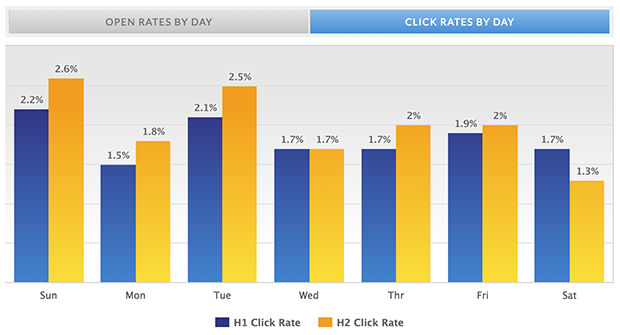 WordStream’s data shows that Thursday is the best day to send emails with over 25% open rates on that day, versus Tuesday and Wednesdays get below 5% open rates.

According to our own data for OptinMonster email campaigns, the day of the week doesn’t make a significant difference to our open rates. However, we generally stick to Monday-Thursday for our email newsletters.

Now that we’ve seen the results of a collectively ginormous amount of data, the general consensus seems to be this…

The verdict: the best days to send are on weekdays.

However, there is no general consensus on the exact day of the week to send emails. The particular day of the week also doesn’t make a huge difference in terms of open and click rates.

Open and click rates tend to peter off toward the end of the week, with weekends being the worst days to send emails.

Surprisingly, however, Dan Zarella’s research from his book, The Science of Marketing, shows that the best days for open rates and click rates are Saturdays and Sundays! 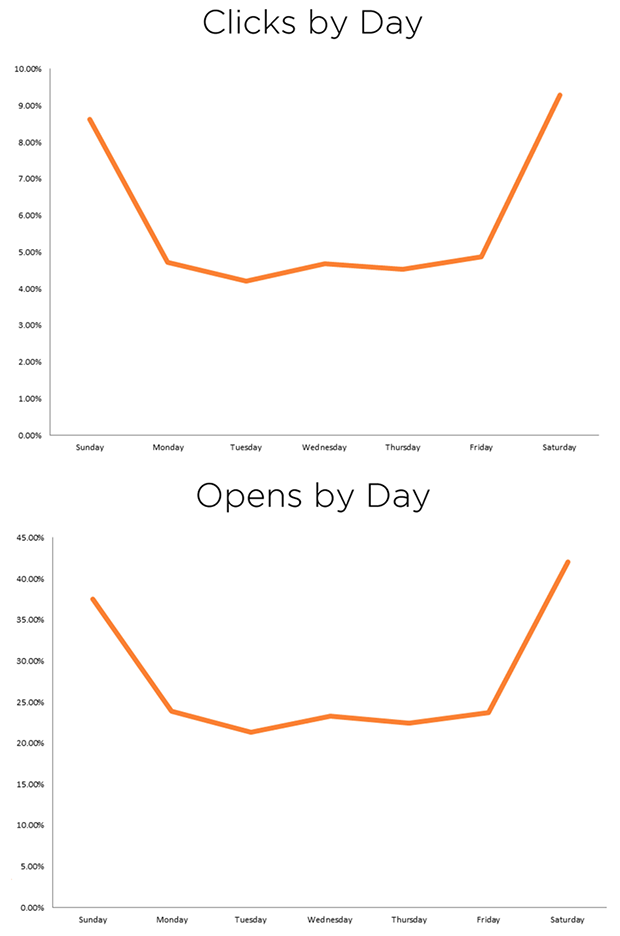 This just goes to show that there are always going to be outliers: some email lists just don’t behave the way the majority do.

If you take the time to conduct your own study, you may just find that your best send day is something completely different from the average (we’ll talk more about how to do that later in this post).

When is the Best Time to Send Emails?

Back to the MailChimp study, the optimal send time peaked at 10AM in the recipients’ own time zones. 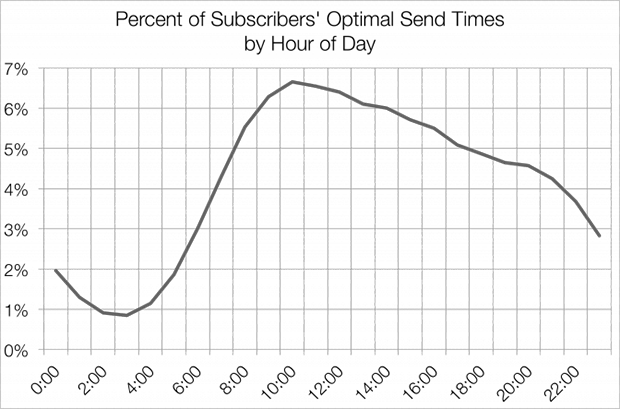 HubSpot’s data is largely in agreement, with the peak time for email opens being 11AM EST. 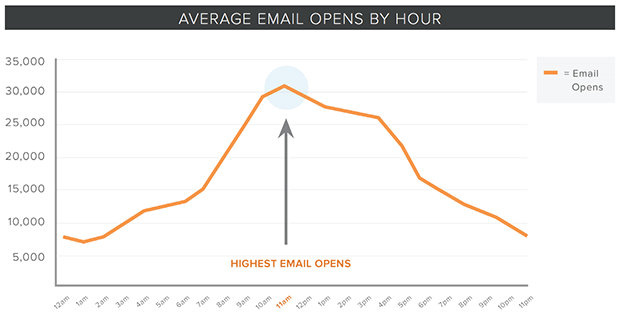 The only exception is on Sundays, when the peak time for open rate is 9PM EST. 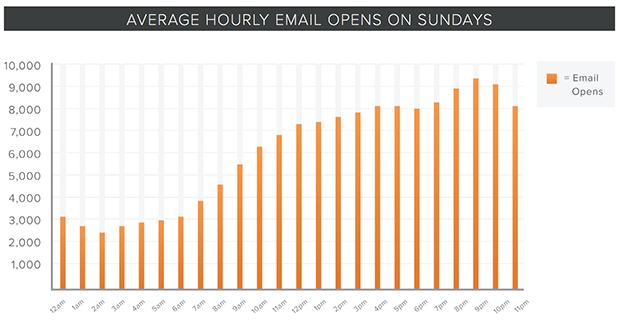 The highest volume (27% of emails) were sent between 4AM-8AM, and these emails also received 33% of the transactions. So Experian concluded that this would be a good time to test more mailings.

MailerMailer showed that scheduling your emails to be delivered during the early evening and early morning were the best times for open rates, with open rates peaking at 12AM.

12PM, on the other hand, was the worst time for open rates. 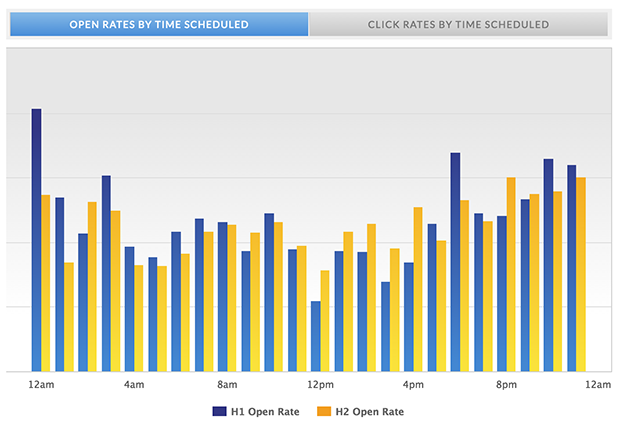 When it comes to click rates, the best time to schedule emails was between the early evening and the morning.

During the second half of the year, however, the highest click rate was at 6PM, and the lowest was 10-11AM. 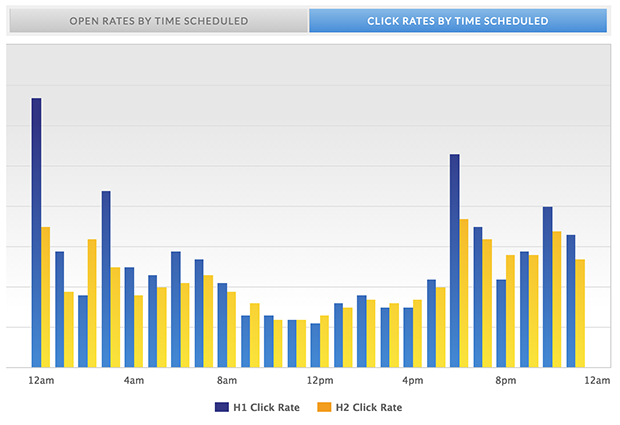 However, even though scheduling emails from early evening to early morning worked out to be the best, the recipients didn’t actually open emails during those times…

As a general rule, emails were more likely to be opened during normal business hours, from 8AM-5PM, with the peak time being 10AM. 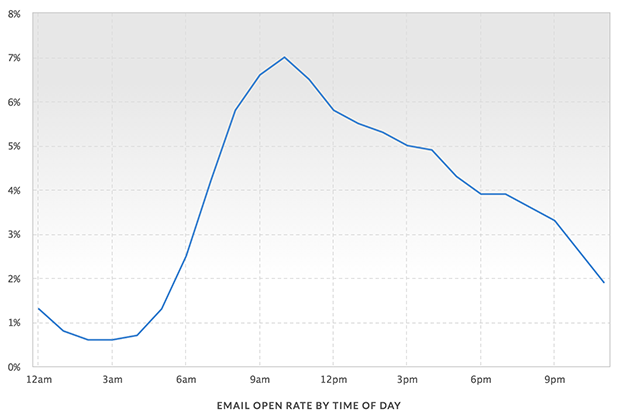 WordStream’s data showed 8-9AM, specifically on Thursdays, had the highest open rate.

Our data at OptinMonster shows that our best time for opens is 11AM EST.

The verdict: most people tend to open their emails in the morning, especially on business days.

However, the data also indicates that you could improve your results by scheduling your emails to arrive in their inbox sometime before that, during the very early hours of the morning, for instance.

That way, your email is ready to be opened by not only the majority of subscribers but also by the early risers on your list.

How to Discover the Best Send Time for Your List

Now that you know what works for the majority of email marketers across multiple industries, you have a good starting point. So first, try scheduling your emails to go out in the morning on weekdays (at 10AM on Wednesdays, for example).

Have some room to improve your open rate? Start testing your send times.

Remember to always test one variable at a time, so make sure you are sending the exact same email with the exact same subject line when you A/B test your send times.

How do you decide what times to experiment with? You may already know more than you think…

Write down everything that you know about your subscribers and their relationship with you. What do they do for a living? What is a day in their life like? Also, what is the content of your emails, and when are your subscribers likely to be thinking about that content?

For example, someone like Ryan Robinson, who teaches people how to start their own business while continuing to work their day job, might want to send out his emails in the evening or on the weekends when his subscribers aren’t at their day job.

On the other hand, someone like Rich Page, who helps businesses optimize their website traffic, will likely get much better results by sending his emails during working hours, when his subscribers are working on their websites.

The key is to deduce when your subscribers are the most likely to engage with your brand.

To figure out when your Twitter followers are the most active, type your screen name into the Followerwonk tool.

In this example, the graph shows that my Twitter followers are the most active at 9AM PST.

You can see when your Facebook fans are the most active with the free Facebook Fan Page Analytics tool. Enter your page name and your details, and they will send you a full report via email.

There will be a section of your report that looks like this:

These are great times to test sending out your emails!

The bottom line is this: finding the best time to send emails to your list is really dependent on how well you know your subscribers.

Don’t experiment blindly. Do test out what’s working well for others based on the studies we covered above.

“Stalk” your subscribers and get to know their habits online as much as possible to get a feel for their schedule. A/B test those active times, and you’ll be well on your way to discovering the perfect send time for your email list.

Having problems with your email?

In over a decade of troubleshooting email related issues, I would say 99% of them are because of...

How to check your email problem

Unable to send or receive email ?Please fill in the below information in order for us to help you...

Why my email sent to SPAM

Why Is My Email Going to The Spam Folder? How To Improve Email Delivery With any email service...